Just a quick disclaimer; we don’t make health claims about CBD, we just share the research. You'll always find references to scientific literature to substantiate what we share. This is for informational use only. Always speak to your doctor before making any changes to your healthcare regimen. Particularly if you are using other medication!

If you’re using CBD, then theres also a chance you may be using another medication as well.

According to results from a 2018 cross-sectional (survey) study of CBD users, 62% were using it to treat a medical condition (1).

Typically if you’ve been diagnosed with a medical condition, its likely you’ll be on some sort of medication.

CBD has been touted as an all signing all dancing solution for just about everything, which creates misconceptions around it. I firmly believe in a lot of its benefits, and the emerging clinical evidence from the scientific literature is slowly backing that up.

However, the use of CBD also requires careful consideration when used alongside a medication, and even more so when multiple medications are being taken.

CBD can affect the way other drugs work, and impact their ability to do their jobs. This may mean a certain medication may work differently, which could affect a medical condition in an unpredictable way.

This is why its always worth speaking with your doctor before considering the use of CBD, especially if you already take medication. Make sure to seek their expertise before making any changes to your medication.

This article is going to take you through some of the potential interactions CBD may have, so you may have some awareness of how CBD may impact your own circumstances.

The liver is where the magic happens when it comes to how drugs work. It manages the availability of drugs in the body, and therefore influences the levels available to work on its various organs and systems. This ultimately influences some drugs magnitude of effect.

The liver uses special enzymes to break down drugs to eventually eliminate them from the body. When broken down, the drugs no longer have an effect.

These enzymes are called CYP’s (short for cytochrome P450). There are many different CYP’s, and they can work at different speeds based on differences in our own genetics, and in response to inflammation, herbs and other bioactive ingredients.

Some people may have fast CYP activity, and some drugs may not have much an effect on these people.

Others may have slower CYP’s, and some drugs may have a powerful effect on these people. We all have a mix of fast and slow CYP’s, it just means that there are certain drugs which people may get rid of faster or slower.

Think of someone you know who can drink 10 cups of coffee and still sleep that night. They have a particularly fast variant of the CYP1A2 gene which encodes the enzyme that breaks down caffeine.

On the flip side, there’s the person who has 1 coffee and still cant sleep that night. They have the slow variant of CYP1A2.

Well, its a similar story for certain drugs. The antidepressant Amitriptyline is a drug which is also broken down by CYP1A2.

Here’s a picture showing the proportion of drugs broken by different CYP enzymes, and which ones do most of the work. 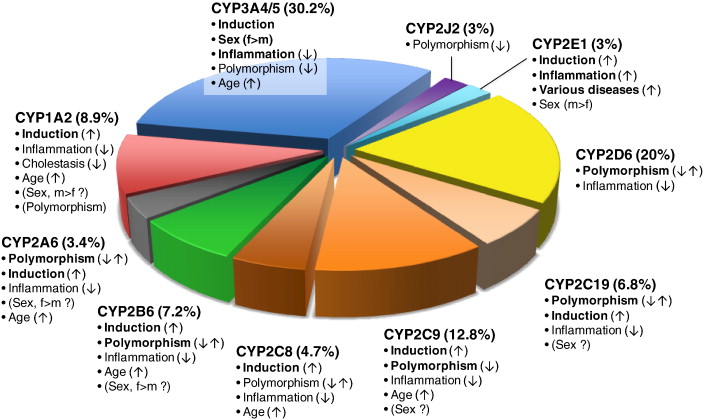 CBD Oil Side Effects on the Liver

The thing with CBD is that it can slow down the speed of some of these enzymes, and cause higher levels of other drugs a person may be taking alongside CBD. This may increase the likelihood of side effects from their medication(s), and of drug toxicity.

It's also a genetic lottery. Part of the reason some people get (more severe) side effects from drugs is due to their genetics, and the speed their CYP’s work. It's important to consider CBD in this equation for a second.

For example, If someone has slow CYP3A4 activity for breaking down the anti-epileptic drug zonisamide and they take CBD, the levels of the drug may be higher for that person than others who also take that same drug and CBD. This may put them at higher risk for side effects, and interfere with the control of seizures.

Taking CBD with other drugs is similar to when they are taken with grapefruits. Its not advised to eat grapefruit with certain medications, because they contain compounds called furanocoumarins that also inhibit CYP enzymes. This can slow the drugs breakdown and potentiate their effects.

Here are a few of the CYP enzymes that CBD slows down, and some of the drugs metabolised by them. Theoretically there may be an interaction, but its not a given. Some clinical studies have shown that interactions can occur.

CBD inhibits this enzyme (2), so theoretically using it alongside drugs like Chlorzoxazone (Lorzone) and theophylline (Theo-Dur, others) may slow the breakdown of these drugs, which may potentiate their effects.

Other drugs broken down by this enzyme include:

CBD inhibits CYP1B1 (2). Drugs that are broken down by this enzyme may be affected:

CBD inhibits CYP2A6 (3). Drugs that are broken down by this enzyme may be affected:

CBD inhibits CYP2B6 (3). Drugs that are broken down by this enzyme may be affected:

In clinical studies, concomitant administration of cannabidiol and clobazam is associated with up to a 60% increase in serum levels of N-desmethylclobazam, the primary active metabolites of clobazam (5).

Toporimate is metabolised by CYP2C19, and blood levels have been shown to increase whilst using CBD (5).

This may increase the likely hood of averse events with clobazam, and other drugs metabolised by CYP2C19:

There are indications that CBD inhibits the hepatic enzyme CYP2C9, reducing the metabolization of warfarin and diclofenac (6).

Pharmaceutical CBD (Epidiolex®) was found to potentiate the effects of warfarin, which may increase its blood thinning effect (7). Excessive blood thinning fro some people may lead to adverse events.

Toporimate is also metabolised by CYP2C9. Blood levels have increased with CBD use (5).

Other drugs which may be affected include:

CBD can inhibit CYP2D6, which is also targeted by omeprazole and risperidone (6)

Other drugs that are broken down by this enzyme may be affected:

Drugs that are broken down by this enzyme may be affected:

In human studies and case reports, cannabidiol has been associated with an increase in plasma levels of the CYP3A4 substrates zonisamide, tacrolimus, and everolimus (5), (8), (9).

The use of cannabidiol with drugs with sedative and anesthetic properties may cause additive therapeutic and adverse effects. CBD interacts with some of the same receptors (GABA) that benzodiazepine drugs like valium and xanax do to induce sedation, which may theoretically add to their effects.

Some CNS depressants include:

In clinical research, taking cannabidiol and runamide (banzel) together is associated with a modest increase in plasma levels of runamide (5).

Theoretically, using CBD and antidepressant medications (SSRI's) like Citalopram may cause an interaction. SSRI's increase the amount of serotonin available for neuronal signalling, and CBD can also amplify serotonin signalling. No clinical data exists on this yet, but its worth exercising caution.

CBD can also inhibit the metabolism of THC (*). This may in fact be beneficial, as THC can hang around for longer for an additive therapeutic effect, such as for pain management (*), (*).

The effectiveness of chemotherapy drugs rely on a very specific dose and time course of activity. Adding CBD into the mix may reduce the efficacy of these drugs, or worse induce toxicity from them. Chemo drugs are often dosed very specifically within a narrow therapeutic window. If that window is exceeded, there may be a risk of toxicity.

If you find CBD doesn’t work well for you and you are on medication, its not a good idea to stop taking the meds - always ask your doctor first.

Drugs that Affect the Potency of CBD

Various drugs such as ketoconazol, itraconazol, ritonavir, and clarithromycin inhibit one of the CYP enzymes (CYP3A4) that degrades CBD. This may mean a slower metabolism of CBD with a longer pharmacological activity (6), (9).

On the flipside drugs like phenobarbital, rifampicin, carbamazepine, and phenytoin speed up CYP3A4, causing reduced CBD bioavailability (6), (9). This may be an example of where CBD doesn't work well.

Much of the research done with drug interactions has been with purified, pharmaceutical CBD. You may have heard of it as CBD isolate. This is a very different substance to CBD in its original packaging, which is otherwise known as full spectrum or whole plant CBD.

There are many other cannabinoids and compounds in full and whole plant CBD which may alter the way CBD works, and thus its effects on other drugs.

Doses of CBD used in cell and animal research are often very high, and those that show inhibition of CYP enzymes may not necessarily translate to humans at conventionally used doses.

In light of these nuances and until more research has been down with full/whole plant CBD, its always best to speak to your doctor before considering its use. Additionally, the FSA has announced that healthy adults should keep their daily intake at, or below, 70mg (about 28 drops of 5% CBD) unless otherwise advised by a healthcare professional (9).